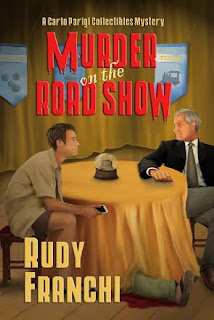 New York (Jan. 5, 2016)Rudy Franchi’s just published mystery novel, Murder On The Road Show(Henchman Press, Somerville, MA) is the latest entry in the “accidental detective” genre. In this example, the amateur sleuth is Carlo Parigi, a roguish New York collectibles dealer who wangles his way onto a new TV program, Antiques On The Road.

At the show's very first stop, Cincinnati. Carlo discovers a rare 1930s movie poster and on his way to taping this treasure , he discovers a dead body. It is a show guest who has been run through with a Civil War sword that has just been evaluated as very valuable.

A local detective cites Carlo as the chief suspect and he is forced to try and solve the murder to clear himself. The bloody body also unleashes a cascade of strange and dangerous characters, chief among them his fellow appraisers,  whose  forced smiles reveal pearly teeth

During all this, Carlo continues to travel from city to city, sharing numerous appraisals of pop culture collectibles ranging from Mickey Mouse memorabilia to vintage Coca-Cola signs.

In conversations with fellow dealers, the AOR'S guests and in asides to the reader Carlo shares some well guarded trade secrets:how to really buy low and sell high(also know as “euchring the punter"); why are the vast majority of movie star signed 8 x 10 glossies totally worthless and exactly what is the notorious "box call."

Also revealed are  the backstage  machinations  of Antiques On The Road, chief among them the tricks appraisers use to convince the producer to put the Holy Grail they just discovered on TV and how do the dealers know so much about the object that the viewer is blinded with science.

Carlo has several personal obsessions: a fervent love for New York; word play of all kind, especially puns and anagrams and a passion for fine clothing. It is the latter that helps him solve the murder, while lying in a sex wrecked bed, watching the sun rise over Bismarck,North Dakota.
Author Rudy Franchi was an on air collectibles appraiser with the PBS series Antiques Roadshow, from its first season in 1997 through 2011, when he retired to spend less time with his family and more time working on his website (www.posterappraisal.com) plus even more time writing.

There are, so far,  to be two more books in the Carlo Parigi Collectibles Mystery series: The Normandie Encryptions  jn which Carlo is swept into the world of high end Art Deco collectors and dealers when he is tasked with finding a history shattering message hidden in the famed glass artworks in the ship's Grand Salon.   This is to be followed by A Flea Bitten Corpse in which Carlo, attending a large outdoor market,  finds a dead body in a rather shabby, large Art Moderne cupboard.

Born and aised in New York, Mr. Franchi lives in
Los Angeles, where he poisons palm trees, pines for New York and spends an inordinate amount of time online ordering from Zabar's.